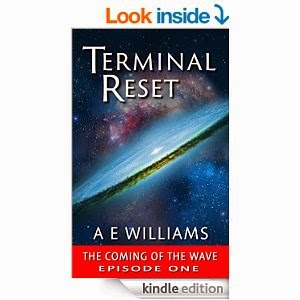 1. Hello, and welcome to my blog! To start off, what inspired you to take the plunge into the world of publishing?

Well, I always enjoyed writing. I have written stories off and on for most of my life, for amusement. I am a ravenous reader, and average between three to five books a week. More if I have good stuff to read. I felt that the story I am currently writing, my "Terminal Reset" series, had a lot of potential for entertaining other science fiction readers. When I found out how relatively easy Amazon Kindle is to publish works, I was hooked.

"Terminal Reset" is a serialized science fiction series. It takes place in our modern world, and details what happens when a Wave of strange energies hits the Earth.

The effect is that everyone on Earth is regressed, physically, about 40 years. So, if you are 56, now you have the body of your sixteen year old self, but with all your memories, skills, and knowledge intact.

All organic life is influenced, with some very few exceptions.

The Wave causes a 'reset' in every aspect of our lives.

Relationships, ecology, warfare, survival, politics, and even food are issues that are changed by suddenly having a global population that is about one seventh what it currently is. Also, people still have access to a lot of the current technology, for a while. But then, the situation begins to deteriorate. World leaders get ambitious, other people come to power, a lot of turmoil and fallout happens because there is a huge culture shock.

Imagine Obama as a thirteen year old, physically, but with all his experience intact. Now imagine George HW Bush and Jimmy Carter challenging his holding the Office of the President because he is no longer constitutionally fit. You have to be a certain AGE, but what does that really mean?

Or, imagine you have been married to a woman for 17 years, and now you are 15 and she is six. You both remember the marriage, and all the history of your love for each other. But, superficially, you are kids.

3. What inspired you to write this book?

The idea came to me in a shower about three years ago, and I spoke with a close friend who encouraged me to write it down. It took off, and we now have eight Episodes published.


4. Are there any books/authors that have had a profound impact on your life?

Mas is a good friend, and is a self-publisher from way back. Very old school. Shoots pretty damn good, too.

"The World According to Garp" is also one of the books that I treasure. It's very powerful, to me.


5. What was your favorite part to write (without spoilers, of course)?
I find the parts with the astronauts, especially once Sir Richard Branson appears, to be the most fun to write. The Sub Captain is another personal favorite. The General is just an awesome character, but man is he ever evil.

You will find a lot of characters here based on familiar people, but, as we say, this is ALL FICTIONAL. No resemblance, etc. etc,

Oh, and the Martians, of course...can't have science fiction without Martians, as Ray Bradbury probably said one time or another.


6. What do you most hope to achieve with this novel?

Sixteen Volumes of a really cool science fiction tale. I have the next five plotted and will be writing them all next year. This is a five year plan to get the entire story Universe set up and running.

There are lots of questions being raised in it. I think this could have some legs...

7. What do you do when you're not writing?

I am a well-known figure in some other areas, and my expertise in these fields keep creeping into the book.

I usually like to incorporate the latest technology and occurrences to keep the story interesting, but you run the risk of seeming dated a decade or so out.

Pop culture tends to lose its shine, once the fad is over. Pet rocks, anyone?

For entertainment, I read, watch movies, that sort of thing.

And, I target shoot.

1. I see you write science fiction. Ever had any other-worldly experiences?

Usually when I have had a few too many Maker's and Pepsi.

Seriously, I have had some weird things happen, but no one would believe me, so...

2. As a writer, it can be easy to get lost in other worlds. If you could visit any fictional world, what would it be?

I would like to live in the Star Trek Universe, at some point or other. Mainly, if I could be Harry Mudd or Cyrano Jones.

I like the ideas behind "Firefly", but it's pretty violent, for a place to live. (Reavers!)

Having your own freedom is important, but you always need a way to get from here to there.

www.terminalreset.com
Posted by Kelsey at 11:52 AM

Kelsey
I'm a vegetarian, a writer, and an in-the-closet opera singer. Well, unless you count my Facebook videos. In my spare time I like to publish books, spend time with my husband and dogs, and watch awesome movies. God willing, I also plan on doing more traveling and taking up gardening. You know, soon.